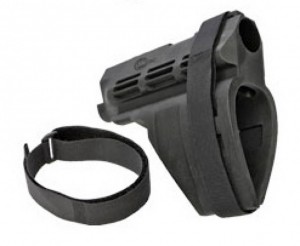 That is all, thank you.

SIG sent me one of their ACP units. This Video gives some of my impressions. On YouTube there was one comment worth note.
“For that weight you﻿ could get a Kel-Tec Sub 2000…and WAY MORE ACCURACY AND VELOCITY.”
Probably one of the most astute observations ever made on YouTube. He has a good point. However the ACP remains much more compact. The SUB2000 is about the same size when folded, and that makes it easy to pack around, but then when deployed, it’s pretty much as long as a standard carbine. The ACP remains the same size packing and engaging. It also uses a gun that you are familiar with… one of your own pistols… With a Trigger Pull that is far superior to the KT’s. And as far as I know, you can’t get the SUB 2000 in .357 SIG, 10mm, .45 Auto, .400 Corbon, .45 Super, .460 Roland… or any of the myriad of other cartridges you can rock and roll with in the ACP.
When I brought the ACP to work, the general consensus was that while it is “Cool” it’s actual usefulness remains limited… because it doesn’t have a Shoulder Stock. Now, you can jump through the hoops and get your Class III Approval and get a Shoulder Stock for your SIG ACP… Then you have an actual Pistol Caliber SBR… Fullfilling the promise of SIG’s name the “Adaptive Carbine Platform”. With out it… Shooting from the Sling is helpful and does stabilize the shot, it’s no where nearly as solid as a simple shoulder stock.
Also, for you Gaming Nerds out there, we’ve come up with a D20 Rule for you guys. For every 2 Inches of Rails your gun has, you get a +1 to your Hit and Damage. So the SIG ACP will give you about a +5 to your basic gun. IRL, the ACP is just making your gun bigger, more uncomfortable, heavier, and less convenient to carry because I’ve yet to see anyone make a Holster for this beast.
Like I said before, in the video… The SIG ACP does has it’s applications. I also mentioned that it would be cool for riding a Motorcycle. I’ve proved that theory TRUE. I rode into town on my ZX-11 (Knees doing slightly better and I’m on some really good painkillers) with the SIG ACP, as shown, slung. Packing a Handgun, I would have to either open my jacket to get to the Shoulder Rig or get up under my jacket to get to a pistol in a Belt Holster. The ACP, slung at the side allows for rather easy engagement as all I had to do was reach down, grab it, and bring it up to target. Not that I actually tried aiming it while on a moving motorcycle… I don’t live THAT far out in the boonies. In the video I mentioned my KTM and rolling the ACP up in the mountains. Uh… that would be a poor choice. The ACP bouncing around banging it’s sharp edges on you. Not fun.
Overall, I like it and it has it’s place, but I am going to send this thing back to SIG.

Unfortunately the adapter clamp wasn’t in the kit, so I can use it yet.  But within moments of the ACP’s arrival, and my mentioning of this… SIG already has it on the way.
First impressions:
Yeah, its cool.  If fact, I am not sure that SIG is going to get this unit back.  I may have to buy it from them.