The Gun Community really goes overboard on THEMES.  Someone comes up with something cool and 89,000 other people do spin offs of that theme and it’s a Forbidden that anyone else says anything about it.  Well, let me break that ice. 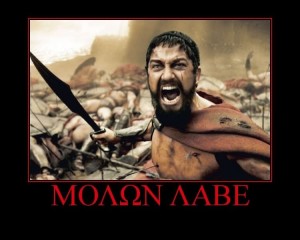 Spartans.   Molon Labe.  TheFiringLine.com introduce the Gun Community to “MOLON LABE” back at the turn of this Century when Rich went up against the Anti-Gunners and used quite astutely “Molon Labe” as their battle cry.     Combine that with the move “300” and holy freaking hell it’s been nothing but Greek Spartans all over the damn place.   Tactical Greek Spartans of some sort must account for 1/6th of the entire Gun Industry now.  Okay, I exaggerate… But come on… This theme is tired.  The only thing more tired is the eternal battle of “Who is more tactical than Who”, which is only slightly more tired than “.45 vs 9mm”.   Don’t get me wrong – 300 was the ultimate badass movie.  We all love the Epic Sentiment found in the film that loosely correlates with actual history.   But to say you are a Trainer and you want to come up with your own Training Company – and you pick Spartan as a Theme?  You have a dramatic lack of Imagination.

Let me help you out if you have no imagination.  You know who else is Badass, other than Spartans?  Vikings.

Vikings raided and pillaged there way all around Europe and the Mediterranean, into the Middle East, and across to North America.  They were Ultimate Badasses because they literally became the Boogey Men of all of Europe.    I had one History Professor that even suggested that Vikings were one of the peoples that fought the Egyptians that were called the Sea People.    They were all over the place.  Scary.  Monstrous.  Why don’t you call your Ballistic Dojo something along the lines of the Vikings? 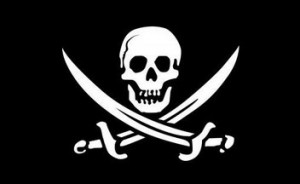 The Pirate theme has some popularity in the arena of motivational patchworks… and that’s cool too.  Unfortunately the popular motif is the Calico Jack standard.  Yes, that image is very piratey but unfortunately John Rackham was terrible at being a Pirate.  Sure, he was a smooth talking rouge that had a couple hotties on his ship with him… living it up like the very image of the label on a bottle of Captain Morgan’s… but he just sucked at being a Pirate.  His biggest score was the taking of another ship… In plain view of Authorities and when they caught up to him – Calico Jack and his crew were hiding in the jungles as the Good Guys took his ship.      Don’t use that as your Pirate Theme – but pick another.  There are lots of awesome Pirates out there.   And just think about how epic your Booth Babes will be one day at SHOT SHOW. 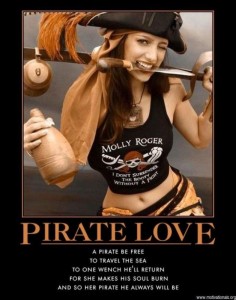 So who do you want to surround yourself with?  A bunch of Magic Mikes or some beautiful Pirate Booty?

Years ago, Gundoc and I started CRUSADER WEAPONRY.  We used the Crusader Knight as our icon and it worked.  But now there are a lot of other guys out there… If I had a dollar for all the other rifle maker’s “Broadswords” out there – I’d have a Broadsword rifle of my own.  Many Copycats…. And that’s fine… as long as they are not overdone like the Spartans are… Judas Priest… I’ve seen more Tactical Spartans at SHOT SHOW last year then their were in the Movie.

Keep the MOLON LABE – Get the Tat.  Because that’s awesome.  But if you are going to name your company something… BE ORIGINAL.