More than in any other industry, merit has nothing to do with success.   Especially when it comes to Cartridges.  Here’s my The 6 Best Cartridges that you are not using: 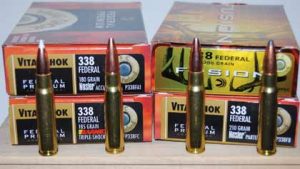 #6.  .338 Federal.  By simply taking a .308 case and blowing it out to .338 Diameter, Federal created something very special.  .338 projectiles are very naturally stable and aerodynamically slippery.  They retain a great amount of accuracy and impact energy at long range… all while operating in a non-magnum, short action.   A little more “push” than a .308, it’s kick isn’t as “sharp”.     This is a fantastic cartridge, and one that would do especially well in a suppressed AR-10 platform.  Think about that for a bit.  Big Bore, without big recoil.  Going bigger than .338 you start to get Nerf-like trajectories.   This is pretty much that Sweet Spot for bullet diameter and weight, while still being able to reach out there and smack something down.  A friend of mine took an elk with a .338 Federal at 600 yards.  Dropped it like it was pole-axed.  When he opened the Elk up he described the heart tissue was like “pudding”. 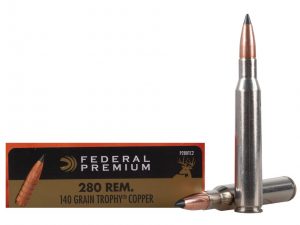 #5.   .280 Remington.  Also known as the 7mm Remington Express.  Same cartridge, different name, because of “Marketing”.   This is basically a .30-06 necked down to 7mm/.284 diameter.  This is giving you better exterior ballistics than your .30-06, and more terminal effect at long range, with about the same felt recoil as your regular old .30-06.  And you are not giving up as much bullet weight as you are with .270.   It’s the perfect balance.   But too many guys have never even heard of it.   It’s not their fault though… There’s been a great deal of cartridges based on the .30-06 case, but the .280 Remington is probably the best of them. 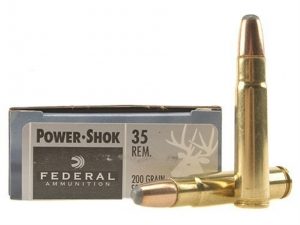 #4.  .35 Remington.  What everyone considers a Lever Action cartridge, this one came out in 1906 and was first chambered in a Semi Auto hunting rifle.   It wasn’t until 1950 that Marlin finally chambered their new 336 rifle in .35 Remington.    This is a good upgrade over the .30-30, which has bullets typically from 150 grains to 170 grains… The .35 Remington has bullets typically from 180 grains to 220 grains, yet offers a similar trajectory to the .30-30.  So shooters of the .30-30 can pick up the Big Brother and will be able to make good hits right out of the gate.  There is a bit more felt recoil though.  More Push but it’s not a sharp or unpleasant kick.  It’s really quite moderate with velocities around 2100 to 2200 FPS.  Like the .30-30 it’s, good out to about 400 yards, but is far more capable at harvesting larger game.   It’s been referred to as Bear Medicine in Appalachia… referring to Black Bear.  And for that purpose, it’s probably ideal.  Especially in a light and handy Lever Action rifle. 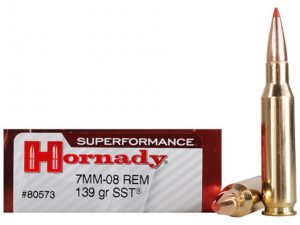 #3. 7mm-08.  By necking down the .308 case to .284″ you get pure magic that hasn’t really been explored enough.  That 7mm slipstream is far superior to .30 caliber… Allowing for improved long range results.  The only problem though is that while the 7mm-08’s projectile is smaller and lighter, it’s not as fast at the muzzle because the longer bullet is taking up more internal case volume.   Because of this, it gets dismissed off hand by most shooters that take a cursory glance at it.   It’s ideal for small framed shooters who don’t want recoil and don’t want to go down to .243. 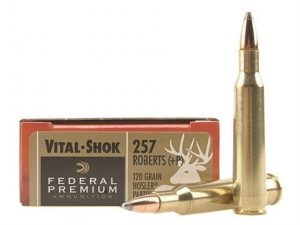 #2.  .257 Roberts.   It was popular in years prior and is now in a rather deep decline.  I was in Cabella’s the other day and mentioned .257 Bob and the guy had no idea what I was talking about.   The Twenty Five Bob is based on the 7x57mm Mauser cartridge, necking it down to a Quarter Bore.  The result is an accurate, flat shooting cartridge that gives very little recoil in return.  I’ve seen guys shooting .257 Roberts at over 4000 FPS…. Exploding prairie dogs like grenades.  And the cartridge can handle more typical 100 and 117 grain hunting projectiles at 3000 to 3500 FPS.   Smoking hotness.  More so than the more common/popular .25-06. 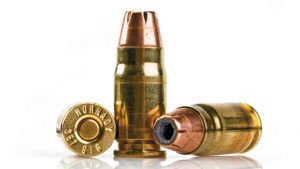 #1.  .357 SIG.  One of the more misunderstood loads out there.   By taking a .40 cal case and necking it down to 9mm, SIG and Federal worked together to give you a cartridge that’s pushing that 9mm sized projectile about 200 FPS faster than the standard Luger/Para loads.

Now, it’s not really a .40 case, as it’s made with thicker walls to help withstand about 5,000 PSI higher in pressure than the .40.   It’s often compared to the .357 Magnum – which is just an unfair comparison.  You are not getting the heavier 158 grain projectile options out there.  And it’s not really a 9mm as .357 SIG projectiles are more bluntly shaped than those for the Luger/Para loadings.  It’s really it’s own little beast.  Most common commercial loads are loaded down from peak performance, as ammo makers want to make sure that the projectiles stop within the FBI recommended 13 to 18 inches of Gel.

This reminds me of how Porsche down tuned the Cayman.  The Cayman was priced exactly between the entry level Boxster and the high end 911 sports car.  It’s performance was also tuned to be exactly in between the Boxster and 911.  It was the Average because it was Tuned to be Average.   The reality is that you can take the Cayman, tune it to it’s full potential, and it’s going to stomp a mud hole in the higher end 911.   See, the .357 SIG is much the same.  There are loads for the SIG round that exceed 1700 FPS.  Out of a shorter barreled auto pistol barrel, not some 6″ horse pistol.  That is fantastic. 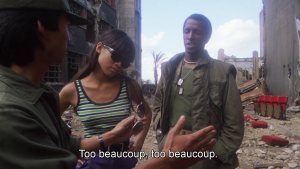 Now lets not just end the conversation with Velocity.  There is more to it than that.   Reliability is another important factor.  A bottle necked cartridge is going to want to feed much easier as you have a smaller peg fitting into a much wider whole.  (this is why no one wanted to come in sloppy seconds after Eightball)  Also having that higher pressure impulse, the ejection is going to be much easier as well.  There will be less case drag as the slide pulls away from the breech, so sticking cases are not going to be a problem like you can get in some 9mm and .40 loads.

Accuracy is where the .357 SIG wins.   In talking with some US AIR MARSHALS, they discussed at length the importance of accuracy.  After Reliability – which was a Pass or Fail for them – Accuracy was their #1 factor.  Accuracy in a Firearm comes from Consistency, and that starts with the Ammunition.  .357 SIG is remarkably consistent, making it naturally accurate.  .45 and .40 are not naturally accurate.  Throwing projectiles shaped more like Pumpkins and little Missiles, it’s quite an achievement that they are as accurate as they are.  9mm has an easier time of it.  .357 SIG though, being accurate isn’t a challenge.  Kenyan that’s running away from a fat kid… it’s just too easy for him because he’s build for it.   Shooting at a full 25 yards, it’s far easier to make your hits with .357 SIG than with .40 cal even with the same gun.    If money wasn’t an object for everyone, I’d suggest getting .357 barrels for all your .40 cal guns and never look back.

19 thoughts on “The 6 best cartridges you are not using.”