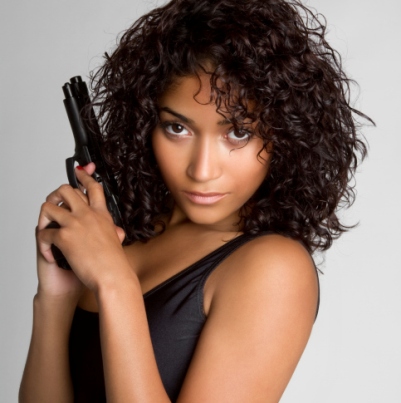 Let me back up to explain what I’m talking about.  Shooter 1.0 is the generation of people who grew up with guns as just part of their every day lives.  They grew up learning the traditions of shooting, and of hunting, and of gun safety and it was never a mystery to them.
Shooter 2.0 is the non-traditional group of new shooters who had no background of firearms, but took up an interest from movies, tv, and video games and wanted to try them out in real life.  Shooter 2.0 comes from a diverse demographic background, but are usually younger, enthusiastic, technology savvy, and are willing to learn everything they can about firearms.  They don’t look like Shooter 1.0’s typically… because Shooter 2.0 may have Tats, Piercings… and do not look like or dress like they came from that Conservative Upbringing that 1.0’s came from.

Shooter 3.0 is a bit different.  They are primarily people who are waking up to the realization that the Second Amendment applies to them.   They are primarily women, and primarily Women of Color.  Black, Asian, Indian, and Latino Women are the bulk of Shooter 3.0, with Black Women being the largest segment of this group.   Shooter 3.0 often comes to the table with no background in Firearms Knowledge from any source or media… But they know that they have the RIGHT to learn.  And that’s a BEAUTIFUL thing!

For the last couple of years I’ve been the guy manning the booths at public events and being that ambassador to the Shooting, Hunting, and Outdoor Trade.   We see a lot of people walking by.   Having a Booth for a Gun Range at these public events has been an education.

Shooter 1.0 guys tend to ignore us almost completely.   They are “Too Cool For School”.  They will walk past, keeping their heads forward, but eyeballing us as hard as they can rotate their eyeballs in their skulls.   Once in awhile, they will ask us for some information “For their friend”.

Shooter 2.0 guys will ask us about what guns we carry in stock, and will ask about tactical training opportunities… and they will often bring their boy friends or girlfriends who are not yet comfortable.  Their Safe Word is “Breakfree”.   We get a few of the 2.0 people a day at whatever location we are all.

Shooter 3.0’s are the ones who walk straight up to our booth, they smile, they ask good questions about all the learning opportunities, and it’s the Shooter 3.0’s that are signing up for the classes.  Because.  They.  Can.   They are proud to embrace the rights that they have been told is for Other People.   Guns are a Man’s Thing.  Or Guns are for Rednecks.   And they now know that a RIGHT in America is for All Americans.    And here’s the great thing about the Shooter 3.0 Crowd… 3.0’s actually Listen.  They drink in the FREEDOM like a dehydrated guy crawling in from the desert drinks in water.   The 2nd Amendment is for them too.  Self Defense is a Human Right.   And we WELCOME them into the Freedom Lifestyle.

Shooter 3.0 Students are the ones filling our Concealed Carry Classes.

The black women as a group are also the ones having the most fun with all of this.  We’re seeing them coming into the range with their friends more and more often… when only a few years ago we’d almost never see any.   They are having a blast!  The Freedom Lifestyle welcomes everyone.   When you are at the range – there is no Hate, there is no Racism… You find that at Liberal Arts Colleges.

Unfortunately there is some Sexism.  You find that in some of the Shooting, Hunting, and Outdoor Trade Marketing and in some of the SHOT Industry Vendors…   Looking at you EAA, specifically, and a lot of others generally…   Can we NOT actively try to alienate the whole new customer base that is keeping the industry rolling?   Just asking.