First thing, you’ll notice that the rifle is sporting a different butt-stock.   Thanks to Matt for sending it.  The new stock still had some wiggle to it like most all M4 stocks do, but it’s not rattling as it fits much better than the original ATI.   It’s bit lighter, and a lot less bulky.  It feels much better.  I’m keeping the rubber pad, which is the bulkiest bit now… not for recoil, but to anchor it in the shoulder while you run the lever.  Recoil is a shove, since the gun weights nothing.  But it’s nothing too sharp or uncomfortable.  It may be a tad bit much for smaller children, but I have seen reduced recoil load for .30-30 – I believe from Federal, which would allow this gun to be quite manageable.   For anyone else, it’s really no problem.   Now, I did learn that the location I have that little Streamlight TLR-1 mounted at… That’s just got to go.  Because that will impact your support hand in less than comfortable ways. 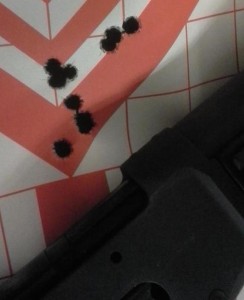 Here are a few shot groups.
Yes, they are hitting a bit low because I still need to adjust them.  I’ll do that once I pick up some Loctite and get out a tiny little screwdriver.  Then I get set it and it will stay.  But you can see the groups are not bad at all for a short, light lever-action carbine.    That nice little Cloverleaf makes me very happy.  These Mossberg 464’s are shooters right out of the box.

Now, they are no Winchester 94’s to be sure.  The action still needs to work in and the loading gate and feed mechanisms need to wear in a bit… but the gun really did run great.  I had no problems with it at all.   I really couldn’t be happier with this little thumper.

I can’t wait to get this out and hunt with it.  All I’m going to add to this gun is a sling.  A simple black nylon GI sling.