I recently had the immense pleasure to attend Harley Davidson of Charlotte’s Project Livewire event.  Special thanks to Steve and Ken there, and Harley Davidson Motorcycles for inviting me to learn more and test ride this new motorcycle.

There has been a lot of buzz about these new all electric technology demonstrators.   A lot of positive feedback, but there has been some misgivings from the Harley Faithful, as this bike is such a radical departure from Harley’s traditional lineup.  However I paid close attention to everyone who had just finished the test ride… Everyone, including myself, was grinning like a maniac from the experience. 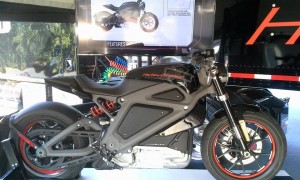 The bikes are not Production Machines. They may never be. They would still need some development before they could become an actual product line.   But even now, they are remarkably finished with impressive attention to details.  HD could sell these now if they really wanted.   And I guess thats one of the things Project Livewire is all about… 1, to see if there is a market and 2, to show the world that HD has the technical capability to do it.  The question is if the Harley Acolytes allow this. There is a disturbance in the force here. But it’s a necessary move. 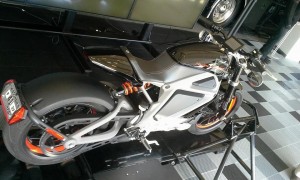 In the Gun Industry, we are coming to grips with “SHOOTER 2.0”, the Non-Traditional shooter who comes from a background of City Life, Video Games, Tattoos… who never grew up hunting with Dad or Grandpa. They have piercings, and ear gauges, and have probably never stepped foot in a Cabella’s. The Gun Industry needs to embrace these new Brothers in Arms. Also the surge of Female shooters, who don’t want just a .22 or a .38 for self defense – we need to understand these customers too. Harley, and the network of Harley Dealers, and the absolute legions of devoted Harley Fans. Harley needs these new Riders. Riders who don’t want a Fat Boy or a Road King… but still want a Motorcycle. New Markets, new customers, this means new Motorcycle styles. This has been long discussed. What was surprising to all of us though was that the new machine here was Electric. 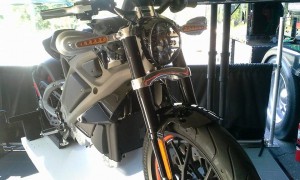 The Livewire itself is a beautiful machine.  Smaller and more Cafe Racer than Harley’s do, but the looks are righteous.   The suspension, the bars, the bobbed seat, all promises a spirited riding experience. The Livewire delivers on that promise.  The great thing about an electric powerplant is that you always have all your torque on tap.  There is no power band. There is no delay as rhe engine spools up to generate the torque.  Throttle response is always there… waiting for you.  The only problem is that the performance is only good for about 50 miles.  But this is only a technology demonstrator, as I said before.  I’m sure Harley will be able to apply this Electric powerplant into other bike styles and configurations to offer something to everyone. Even me. 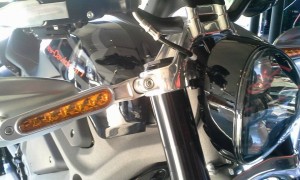 Let me be honest here. I’ve never been keen on electric vehicles. Living in rural Utah, they made zero sense.  None whatsoever. Save that Electric crap for Golf Carts and Mobility Scooters!  But I’m not in the high deserts of Utah anymore.  I’m in Charlotte, NC. Things are different here.  If you go Downtown or “Uptown” as they call it here, the parking meters on the streets are right next to EV (Electric Vehicle) charging stations.  They are all over.  Parking lots have EV charging stations as well. With Reserved Parking so EV owners can come in, park and juice up, and get back home with no problem.  An EV here, makes sense.  And out of all the EV’s, I think motorcycles make the most sense.  They are the most efficient, and hold the most potential. I know Chevy has the Volt, Caddy has a new all electric car, as do other makers. But there are only a small handful of small upstart companies playing with an Electric Motorcycle, Harley Davidson getting into the act throws a lot of credibility to the concept as a whole and sends a clear message that such a vehicle is viable. 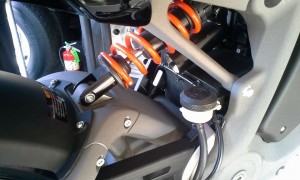 Right now the only drawback to the big is that range… but that will improve. Batteries are improving daily, and as they improve cost is dropping. As will the cost of the electronics. I mean, come on, you can get a touch screen tablet for 99 bucks now that is more powerful than your laptop from only a few years ago. I can see the cost of these electric bikes getting quite low in the future… Electric Motors are cheap already, so the only constant cost would be the frame, brakes, tires, and such. Take away the very expensive and complicated engines and using cheaper and easier electrics… I can see these bikes being maybe 4 or 5 thousand brand new. Eventually. Once the technologies here and common place. And I think they will become common place in the Cities. Rural locations may never get on board, but what works in Rural areas doesn’t work in the Cities anyways.
Riding the Livewire was an amazing experience. I can say “It was unlike anything else I’ve ever ridden.” But that doesn’t sum up the magnitude of experience behind those words.
The Livewire is a small motorcycle, and it feels light thanks to it’s low center of gravity. Something so small and light does not give one a lot of expectation for real automotive performance. You flick one toggle switch to RUN, and then you press the START Button. There is no shrill whine of a starter motor and there is not suddering of the machine as it fires up. There is no vibration. There is just the cool blue numbers on the displace. 111 says it’s waiting. You hit RUN and that 111 turns into 0. Zero being your miles per hour. The throttle is live. You twist it, your moving. That’s it. There is no shifting. There are no gears. There is no Clutch. This is not like a normal motorcycle here. Did I mention that there is no noise? It’s silent. Like a large predatory cat, it’s just ready to leap. As you roll on the throttle, the bike just moves. You roll on that throttle hard, the bike surges forward effortlessly with great gobs of speeds. As the bike rolls, there is an electric whine from the motor. Some have said it sounds like a Jet Turbine. Yes and no. Not like any jet turbines from Earth. This sounds like something Captain Kirk would ride. It is different. It is intoxicating. The acceleration is very linear, very smooth, and just effortlessly goes from slow to fast in exactly the same way an internal combustion engine doesn’t. Let me put it this way… With a normal vehicle, you apply more throttle, and you can feel and hear the engine speed up before you sense any actual increase in velocity. There is none of that with the Livewire. You apply throttle, your apply linear acceleration directly… It just moves you. Your body, and your soul. There is a purity here that I’ve never experienced before. This is how Motorcycles should be.
Braking is different too. It uses Regenerative Braking. So when you roll off the throttle, you feel that system kick in and capture that motion to recharge the batteries. There are your traditional handbrake and foot brake like on any other motorcycle… but I never had to touch the rear brake and only really tapped the front a couple of times on my test ride. The system sounds complicated… but the experience in it’s actual use was instinctual and natural. Telekinetic even.
I want to see other motorcycle makers explore Electric as well. From a pure performance standpoint, there is too much potential not to. We’ve seen an electric bike tackle the Isle of Man TT. We’ve seen Electric bikes in movies, Star Trek, Oblivion… and now I’ve ridden one. I didn’t want to get off that bike. It was fantastic.
The real question is this… Would I buy a Livewire? Now. If these test bikes were for sale, and if I had the money – YES. Yes I would. And if you test rode one – You would too.

Speaking of reaching out to other markets, I’d really like to see Harley develop another sportbike, and take a good hard look at the Adventure market and Sport Touring. With the Capability that Harley has just demonstrated, there is no reason that they couldn’t have a Bike or two for every segment. They have the Cruisers and Baggers down. It’s time, Harley, to branch out. We know you can now. 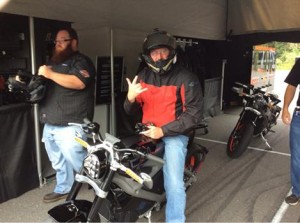 Again, thank you to the awesome people at Harley Davidson of Charlotte.

14 thoughts on “I have ridden the Future of Motorcycles, and it was a Harley.”