There are a lot of stuff that bugs true Gunnies in TV and Movies… But the number one thing that bugs me? 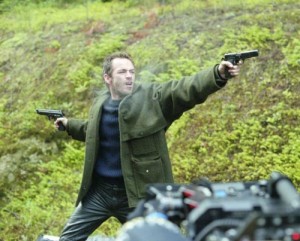 I’m not talking about just Dual Wielding… but pointing two different guns in two different directions.   We see this in far too many otherwise decent movies.  Note to Directors:  STOP IT.  Doing this can actually ruin what could otherwise be a decent movie.   I’ve actually turned off movies I was watching when this stuff started happening.   Worst offender: 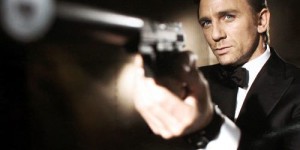 It’s one thing if James Bond does it.  He’s British and they are into Tea Cups and Saucers like no one’s business… But still.  Bond is supposed to be the consumate professional with a license not just to carry a gun, but to use it at his discretion.  I mean you wouldn’t see Jack… 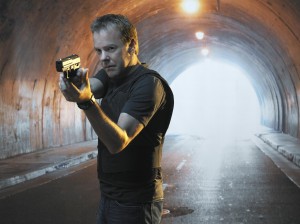 Oh come on… Jack Bauer too?  He’s killed more terrorists than a dorm full of Call of Duty players.  And he’s not even just Tea Cupping – but taking it to the extreme from of using his finger tip to brace the trigger guard.  That’s some hard core tea-cupping there.  Still… I’m looking forward to the new series of the Bam-Bam-Bauer-Power-Hour.  But this photo right here makes me wonder why.

This just makes the Trainer in me get all twitchy in my right eye.  I hate seeing this.   That image is from the movie HEAT.  A movie that actually does very well in the gun handling department… until That Guy.  That Guy is supposed to be a veteran detective, a pro.  You see this all the time on TV and it grates my nerves.  But in a movie with a director like Michael Mann?  It’s distracting.  Not only that, but…

It’s going to be painful… watch the 3rd shot.  Try not to cringe.

That was almost enough to make me stop watching The Walking Dead. But we’ve seen this in countless shows… Phantom Safety Syndrome and Ghost Cocking sounds. Why do Directors insist that they actors do something that is mechanically not possible? What are they trying to accomplish? It’s worse than the Dramatic Cocking. 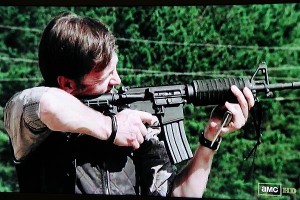 The Chickenwinging, no rear sight, laying his head down like he’s making out with it, Evil Governor.      Who also does this:

Right Hand shouldering… to the blind eye.  Let’s just point out that this doesn’t work.

And then there is RICK.  Who can’t hold up the barrel of his Python. 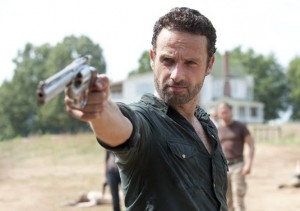 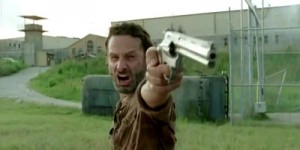 I hate Rick… almost as much as I hated his wife.  Most every episode of The Walking Dead is a parade of bad decision making and bad gun handling… The show gives me a headache every time I watch it.  It’s morbid curiosity that I keep watching.
BTW, the only guy that has his wits about him is Glenn.: 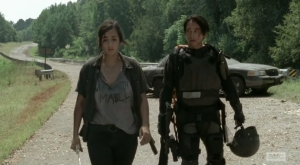 Glenn has the sense to at least put on some body armor.  He also scored the Hot Chick as his Main Squeeze.  And for a traveling companion here, a cute chick with luscious Ta-Ta’s.   Glenn Wins.