The 1911. It’s a fantastic shooting platform. I had gotten away from it for some years and now I’m back to it for the time being. As an instructor I’ve made many observations on the guns and the shooters and I think I’ve come up with some conclusions. 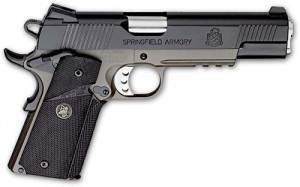 1. The 1911 demands loyalty. You can’t cheat on it and have it be faithful back to you. If you are going to carry a 1911, you need to marry it. Here’s why… In most every class I’ve taught that had a 1911 shooter in it, I’ll catch a guy draw his weapon, push out from the high compressed position, and then crush his trigger to no effect because he forgot to sweep the safety off. Most of the guys that do that, do so because their other guns are not 1911’s. They are Glocks or XD’s or M&P’s or something altogether not 1911’s. Don’t cheat on the 1911. Because that’s going to lead some issues.
2. Don’t go shorter than 4 inches. 1911’s that are shorter than a “Commander” start to give up reliability. You give up other things as well to the point that you are detracting from the fantastic qualities that make the 1911 the 1911 in the first place. The long sight radius, the accuracy, the pointability… These things make a 1911 what it is. Chopping them down to 3 inches… you’ve ruined it. You no longer have the pointing, the accuracy, the very things we love the 1911 for. And I’ve never seen a compact 1911 of any sort complete one of my handgun courses without turning into a hot mess of problems. The Commander is 4.25 inches. Many 1911 makers are doing a 4″ version, and they seem to be running just about as well as any good full sized 5″ “Government” model. Shorter than 4, it’s effecting the geometry and the timing and it’s just not worth the risk in reliability for the perception of greater concealment.
3. The 1911 needs to be well lubricated. Some guys like oil, some grease, and others a combo of both in different places. However you like it – that’s fine. As long as you oil it. Most every 1911 I’ve seen with issues that wasn’t shorter than 4″, was a pistol that was bone dry. Just like an AR-15, it can be hot, and dirty… but it can’t be dry. The 1911 likes to be wet.
4. The 1911 is a traditional type of pistol so it needs a traditional type of holsters – leather. Good leather. Most 1911’s are north of $1,000 dollars, so don’t even think about it letting it ride in a cheap rig. And remember what I said about marrying the 1911? That means showing it the respect that it deserves… let it ride in something nice. Let it know you care. Here’s the other reason… The 1911 is not for the Duffers. It’s a pistol for the experts. It’s for the experienced shooters. It should show some miles on it. Let it get some holster wear, let that holster break in… And you do that by #5…
5. You Must Train with it. Practice your draw. Practice your re-holstering. Practice getting that one thing that the 1911 excels at – that fast and precise first round heavy hit. All gunfights have one thing in common. That first shot. Make it count.

17 thoughts on “The 1911 Platform Observations”