Before I roll forward with Armchair Quarterbacking Detonics, I want the readers here to know my long history with the Combat Master, and my affections for it.   I wrote two articles about the Combat Master for Concealed Carry Magazine.  Both articles were rather glowing of the guns overall.   You can read them both here.  The second article has photos here.

“This is like Scarlett Johanson winning an Ultimate Fighter Championship.”

One of the things we had talked about was the use of a regular dovetailed front sight with Tritium and moving the rear sight back to the normal 1911 position and using a regular Commander style hammer and a Beavertail.    Make it more like a regular 1911 that people are familiar with instead of having the Combat Master occupy the Uncanny Valley.  We had even discussed me buying one in this configuration from Detonics USA, and Jerry had said “Don’t worry about it, George.  We’ll send you a prototype.”  This was being discussed while I was writing the second Combat Master review.   But before I could return the review pistol to Detonics, the company had closed its doors and Jerry was removed from his office.  And what we had discussed went with him.

Some time after that all happened, Detonics had reopened.   And they did come out with a new version of the Combat Master…. and this happened: 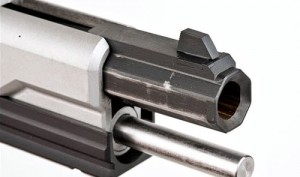 They did indeed use a regular sized front sight post… and they moved the rear sight back to where they normally go.  And then they did that.  I don’t even know what that is.  No one else did either as this version of the Combat Master was killed off almost as fast as it had come out.     Here is where it failed again.  It’s still not like a 1911… It’s still almost familiar but wrong – dead nuts in the center of the Uncanny Valley zip code.   Right where people look at it from a distance and say “hey, look at that” and then they get close enough to really see it and they are repelled.  Instinct dictates the initial attraction and the subsequent revulsion.  Because it’s not what they are familiar with it.  A hexagon barrel with the front sight mounted to it is just fine… On a Webley.  But on a 1911 pistol of any sort?

Detonics needs to bring back the Combat Master because that’s WHAT DETONICS IS.  But they need to forget that strange polygonal barrel and make it more like a traditional 1911.

The scalloping of the ejection port on the older Combat Masters is both elegant and beautiful.  That’s a nice touch that should come back.  The Rear Sight should be in the normal 1911 position.  But not a Novak ramp style.  Something more like an ICE Claw rear sight.  And give it a small Beavertail.  For better accuracy, reliability, and ballistic punch, lengthen the barrel a bit.
The other problem with the Combat Master is the Magazine.  They are shorter than the standard Officer’s model, which means you are Single Sourced for them.  Lengthen the frame just a touch so that you can use regular Officer’s Magazines.   The result is you will have a gun that fits people’s hands better and they can get a bunch of spare mags without having to sell a car to do it.
I’d even take this a step further and use a GI Guid rod and Bushing.  Take a look at the Nighthawk T3.  You know what, Detonics?  There is a waiting list for those things.  And those guns cost double your discontinued Combat Master.   Do you see the difference here?  You probably don’t.  The difference is your gun was not just different – it was strange.  While the T3 was a compact 1911 DONE WELL.  That’s the difference.  And that’s why people were waiting to pay double dollars for something that the Combat Master was competing with.

The 1911 should always feel like it’s familiar.  You should never have to break out a Manual or look up a How To video on YouTube.  The 1911 should be a 1911.  Like Apple Pie and Baseball, it should be Classic and it should be reminding their owners of heroic days past… and it should be inspiring in its accuracy and reliability for future adventures.   It it doesn’t do that, you’ve failed.   I can’t explain this any better.  If it’s not clear to you, well… Good luck.

The MTX pistol looks interesting.  But you said a 3.5″ and a 5″ version will be available in 2013.  Nothing looks worse than saying you are coming out with something and then you don’t.  Unless it’s a double stacked 1911 with a 3.5″ barrel.  Just don’t do that.  It sounds good at first but is never a good thing once it’s in the hand.  Just drop that, and concentrate on getting that 5″ version done… and maybe even do a 6″.  Do a 10mm version in 6″ because that would be awesome and something that is just not available outside of STI.  A 6″ 10mm MTX would have me drooling.

Bring back the Range Master and the Street Master.  Make the Range Master a 5″ traditional 1911 with adjustable sights and the Street Master a 4.25″ with fixed sights.  Make them like the originals, but better.  Give them Match barrels and triggers and make them as accurate and as reliable as any other high end 1911, but do it at a competitive price.  Look at Dan Wesson’s 1911’s.   They are absolutely excellent.  Do some extra touches that need to be done… Polish the rails and the locking lugs.  Polish the trigger parts so the trigger feel is absolute perfection.    And forget the gimmicks.  The only options should be polished blue or stainless.  The grips should be stunning woods with torques head screws so it looks clean.  Double Diamonds.  Traditional.  Traditional done to Perfection. Make the guns live up to their names.  It should make the person feel like he really and truly is holding something special and wonderful in their hands when they pick one up.  Nothing about it should make one raise an eyebrow.

If at this point, you can’t do a good traditional 1911, Detonics should be allowed to die with dignity.  But for some people, the name still holds currency and we want it to succeed.  You just need a man with some vision to take charge and make the name great again.  You need another Jerry Ahern.

I’m available for contract negotiations at any time.  😉