I tried to look at some Harley Davidson Motorcycles last Saturday with Caryn and Evil Jim.  We went to a normal bike shop first, Honda’s, Zukes, Yamas, Kawis…. The stuff I normally like.  And of course I found… oh… about a dozen bikes I could have ridden home.
And then we went to the Harley shop. 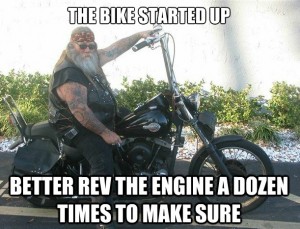 Outside the shop was some used bikes lined up.  One in particular looked most appealing to me.  I liked it’s look because it had a nice fat front tire that matched the look of the bike, but it was more of a Sportster 1200.  This meant it was automatically about 2000 dollars over priced.  But I was digging it.
And then the salesman was so kind as to fire it up for me.  Thankfully this killed my interest in any Harley about instantly.  It was shaking like someone was tazering an over caffeinated Michael J Fox.  I expected to see stuff to start flying off the thing.  Also, it was just loud as fu**.  Coming from a lifetime of firing guns of varying calibers with varying levels of earpro – I can tell you.  It was loud as fu**.  Painfully so.  And not loud as in Voice of Almighty deep rumble loud.  I’m talking more M-60E fired in an indoor range and you didn’t get your earpro on before the jackhole pulled the trigger.  Trust me – it’s that loud.
I stood there looking at this thing violently shaking as it was abusing what is left of my hearing… The sales guy was smiling like he was proud of this.   I don’t understand this.  To me, this thing is missing some parts or something is seriously wrong in that engine… and for the love of all that is holy, put a Muffler on that thing.
We went inside to look around.  I like the looks of the Iron 883, and in most bikes, an 883 is a good sized bike.  I love the Mid Sized bikes.  Between 750 and 1000, that’s my sweet spot.  But nooo… not in a Harley.  In the Leather Chaps world of HD, the 883 is a “Girls Bike”.  Or worse yet, it’s considered a “Starter Bike”.  Really?
Let’s see… consider the flag ship bike in the shop was a speed boat green sparkly festival of bling for over 30,000 Dollars US.  You have got to be kidding me.  What with the HD Shield in the tires, and half the dealership being SWAG… I just can’t take Harley as a serious motorcycle brand.   It’s too ridiculous.   It’s too BRAND and not enough BIKE.   It’s not about Riding, it’s about being in a Cult.
Harley is the Scientology of Motorcycles. 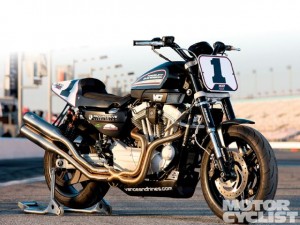 You made one good bike, Harley.  ONE.  And you cancelled it.  What the hell is wrong with you people?  You are so over stuffed with your own Egos and calling yourselves Bikers and talk about living the Bike Life – but I never – NEVER see you freaking posers out riding in bad weather.   I never see you guys actually doing any hard core riding.   I see your shit in TRAILERS and in Garages.    You got a Harley – Feh – You have a Garage Queen.   So unless you are riding 8 thousand miles a year or more – You can just STFU about your Harley.

27 thoughts on “Harley and Me”