This year’s SHOT Show was pretty optimistic compared to the last couple years.  Last year it felt more like a funeral as there was a heavy cloud over everything.  Year before, the ATF arrested a bunch of guys from S&W, which put a wet blanket on a lot of folks.  This year… The table was turned.
Our friends at Tannerman’s Trading Company snapped THE PHOTO that captured the Spirit of SHOT this year. 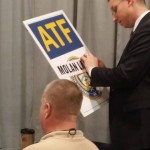 Ryan Horst spotted this and nudged Travis Bishop who snapped this classic picture that has gone viral.  It’s all over Facebook and hitting the blogs now.  (Even mine!)  Agree with this or not, it’s a good example of Peaceful Resistance.  One of the ATF Agents did admit he laughed at it.
I’ve posted on Facebook my impressions of some of the guns I took the opportunity to check out.

Glock 42. It’s the best .380 Auto now. Take that for what its worth… There is no reason that wasn’t a 9mm. Glock will own the .380 Market – Yippy Skippy. 4 years late, Gaston.
The Glock 41 is awesome and I must have one. Points and feels better than a 21SF in my hands. I will have one. I’m a sad Ogre that it will not be available in 10mm. Glock seems to be done with 10mm. Hopefully Lone Wolf can make a conversion slide/kit for that.
I really can’t tell you how much I dislike the Remington R-51. The feel of it in the hand was disappointing. Longer than a Solo, and a little taller… but the action when I pulled the slide back was just terrible. Notchy doesn’t begin to describe it. The grip safety is horrible too. Oh, it will sell. For awhile. I wouldn’t take one as a gift. I’d rather have a blister on my belt line than an R-51. I consider it suspect they would let a few people shoot it at Gunsite, but not let the gun press shoot it at the Media Range Day. Disappointed and Suspect move. Now, if they got rid of the Grip Safety and the stupid action and made it with a normal lock system… the gun would be good. Maybe.
Sig’s 320 really is an adhock mashup of putting a striker system in a P250. It was disappointing and I was hoping for better from SIG. Trigger felt Twangy. The gun felt more like a toy than a serious weapon to me. If this is SIG’s push for future pistol development… I find it very sad. I heard one guy say that S&W and Springfield better take note! I about laughed until I saw the dude was wearing a SIG badge. Yeah, no bias there.
Walther has a 5″ barrel version of the PPQ. THIS is the Sleeper of the SHOT SHOW. No fan fare. No glitz. Just a quiet presence in the small Walther booth. I freaking love it. I’ll get one of those too, one of these days.

The other weapon that I am impressed with and ogled was the Desert Tech’s MDR.  A Caliber Changeable Bullpup that can be run ambi.  Very well thought out, and handles well.  Feels good.  Looks good, and you can shoot it right or left handed without changing anything.  It’s impressive.  To say the least, I want it.  I think I’m going to have to start saving up.  Because it can go 5.56, .300 Blackout… and .308.  I’m quite smitten with it.  Photos of that are found here.