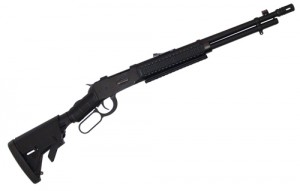 I can admit it when I’m wrong.   I can change my opinion when new information comes to light.   And I can change my opinion when something I once thought a disgusting abomination proves to be actually useful.   Well, in this case, that Something is the Mossberg 464 SPX.   When I first saw it in photos I thought it was a joke.  When I first saw it in person at SHOT Show, I was horrified.
But over time, the Mossy 464 series has grown on me.  And the SPX version has even become less offensive to my Lever Sensibilities. Now I’m at the point that not only to I actually like them… But I actually really WANT ONE.

Here’s what I like about the 464 SPX from O.F. Mossberg & Sons, Inc.1. It has good sights and not Buckhorns… No one likes Buckhorns, not even guys who know how to use them. And these work in lower light conditions. 2. The stock adjusts to fit different sized shooters, or the same shooter through all four seasons.
3. The muzzle end is threaded. This means you can take off the flash hider and put on a muzzle brake, or a suppressor… Or a thread protector and have nothing on it. You have options.
4. It’s a Mossberg… so while it’s not a Japanese made Winchester, or a questionably made Marlin, or Brazilian or Italian made whatever… It’s a solid, hardworking US Made rifle that’s going to get the job done.
5. The safety is actually in a logical place for a Lever Action.
6. These things actually shoot very well.

Ugly? Indeed… But it works. And that makes it rather attractive to me.  I think if I had one I’d get the gun Cerakoted for improved corrosion resistance, put a sling on it and cover the rails…  Maybe change the stock to a lighter unit.  But that’s less important.  I’d put a Battlecomp on it first chance I got.  And then I’d call it good. 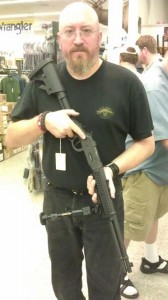 Updated:  Okay, you guys know I am not one to leave well enough alone.  I’ve been looking at the 464 series of rifles and there seems to be some holes in the line that could be filled.
The 16″ barreled SPX loses a round of capacity and a chunk of velocity from the standard 464 rifle with the 20″ barrel.  I think it would be nice to offer a 20″ SPX and let it take advantage of that extra oomph and extra round.  That’s one thing.  The other thing, is the they have a nice weather proof marine finish… but with a not so weather proof wood stock.  How about a Marine Finished SPX?  And how about a Marine Finished 464 with a regular furniture, but in a sturdy synthetic?  I know I’d like that.  I’d also like a Trapper version of the 464.  Traditional, but in 16″.  Okay, we’ve got this ball rolling… Where is a .45-70 gun?  That’s right… I’m looking for a Guide Gun Alternative here.  The 464PH, Professional Hunter, make it like the Marlin’s SBL… top rail, big loop… Do the same config in .30-30 as well.  And while we’re talking calibers… Let’s look at a .44 Mag version of the SPX and Trapper.