Okay, so the KTM is so far doing just fine in the snow. Save for the small “Endurance” LCD dash/trip computer… which died on me. So I have no speedo or Odometer… which is no big deal.
The bike handles as I expected it too in the snow, or even a little better.  This is what I like about the KTM, the stability.   Other bikes, when they lose traction, just seem to say “Oh to hell with it.”  The KTM seems to fight to find traction anywhere.  Standing on the pegs, you can just let the bike squirm around under you, hunting for some grip.  The cold didn’t even bother me.  Thanks to the combo of the moose-ears and the long johns, it’s not so bad. 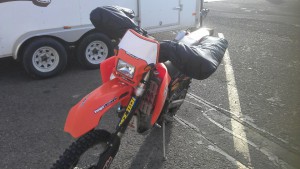 This is a case of “If it’s stupid, but works, then it isn’t stupid.”  It looks stupid.  But it works.  Very well.  Normally on my ride to work I’ll lose feeling in my hands even before half way there.  Now, it’s not a bother.  The Moose Ears are actually my name for them… they are actually ATV Handlebar Mittens from an outfit called “Classic” that makes lots of ATV stuff.  Never thought I’d buy anything from them, as I don’t have an ATV.   But I was lookinat the ATV area of Basin Sports and was straightening things out there and I had this set that was the last pair and kinda in the way.  I thought “Hell, I should just buy them to get rid of them.”  And then I thought, “Hell yeah, I should buy them!”  The Mittens look like Moose Ears, so that’s what I call them. They are a huge help.   I’d rather have a set of Hippo Hands, as they are made for Motorcycles. These Classics are made for ATV’s. There is a difference. But the Moose Ears cost me 10 bucks, so I’ll call it good.

I am optimistic about my chances of surviving the Winter now. Every other Rider that I know of has now parked it for the remainder of the season. I am the only one left on two wheels that I’ve seen in the last week. I think I’m kinda nuts here… but then again, if certain things hadn’t happened that did happen, what would have happened was that would be driving a 2006 F-150 Crew Cab right now. Black. With a lift. Four Wheel Drive. And a heater. Oh well.