Just a quick update on my Marlin 1895GBL, .45-70.  To recap, I bought one, and it was faulty.  The stock was loose and the action was locking up.  I only got a half a box of rounds through it before I had to send it in to Marlin for repair.
It came back from Marlin the other day, repaired and ready for action.  Some nice Freight Damage on the stock now.  Thanks a lot for that, Marlin.  I send you a new gun in and it comes back looking like an old used one.  That’s just SPIFFY, Marlin. Thanks for that, seriously.  THANK YOU.
The good news about it is that the gun function and the stock fits.  It’s now a functional firearm now.  Looks 10 years old, sure, but hey, at least it’s a gun now.  So to celebrate the return of the Guide Gun, I picked up a box of Remington 405 grain Jacketed Soft Points.  A nice heavy slug on a moderate load.  Recoil is mild.  It’s isn’t a kick, but a shove.  The muzzle blast is impressive, especially after dark.  To say it’s fun to shoot is like saying Bacon is Tasty.  No kidding!  One can easily fire multiple rounds in rapid succession, with accuracy.
But man, I love shooting this thing!  It’s a blast!  And the fact that it packs enough punch to knock down Bigfoot, it’s a bonus.
So, I have to give a thank you to the Evil One on WTA, my friend Jim Jones… He’s the one that talked me into getting this gun, and I am very happy he did.

I had to.  After shooting Evil Jim’s that bloody thing just wouldn’t get out of my head.

I had to join the Guide Gun Club. So I looked at what we had at the gun shop and I picked out this little thumper. It’s nothing fancy at all, just a Marlin 1895GBL in .45-70. It’s going to do just fine for my needs. The Guide Gun has always been a gun I’ve wanted since I’ve had just about all the others. Finally got my own. 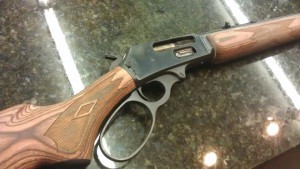 I might have to order some Wild West Guns sights for it… but other than that, I’m keeping it nice and simple and stock.  No rail, no red dot, no “Tactical”.  Just Old School Thumping Power.  Gotta love it.