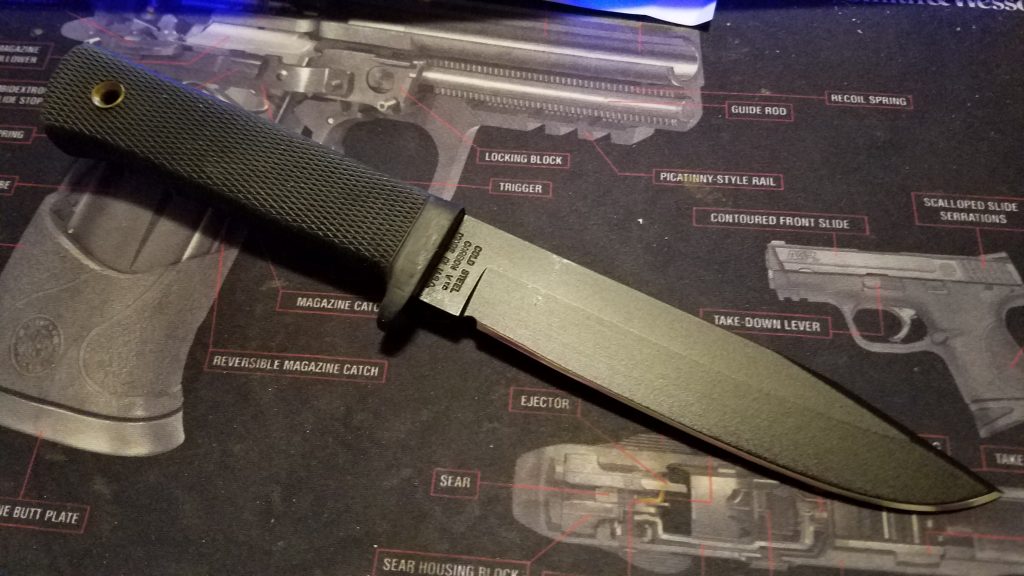 This knife was a gift to me by the Prince of North Carolina.   Actually, we’re on quite good terms.  No, seriously… a friend of the family gave this knife to me… and as such, as all Gifted Knives are to me, they become quite special to me.  But at the same time, this knife is meant to be used hard.  Which is why I had to get another one.  Because I wanted to use it – Hard.  Everything about the design is beefy and rugged and just screams that it wants to get Deployed or go Hunt Orc.  The knife wants to Adventure. 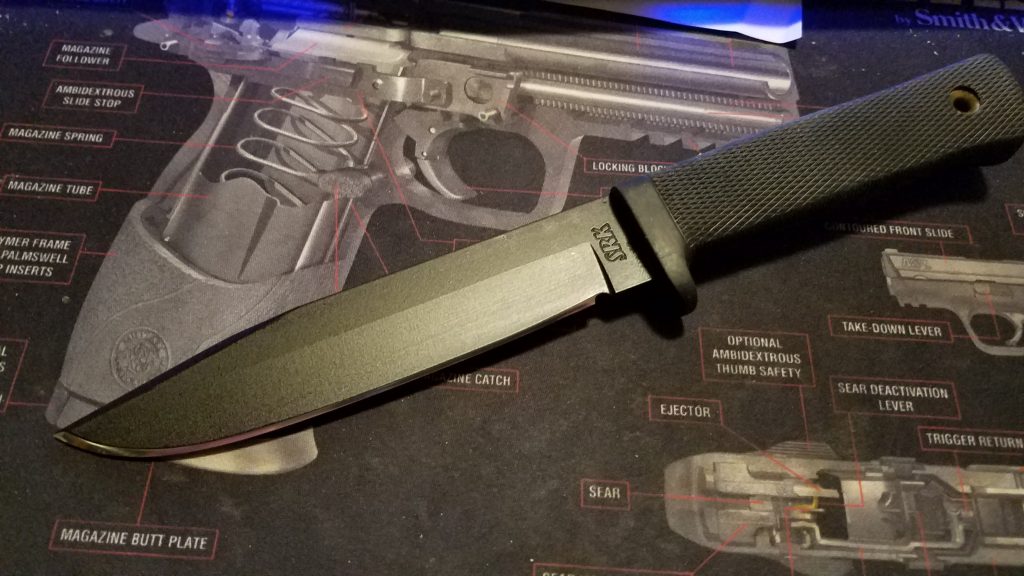 The SRK is designed to be a field knife.  A survival knife.  A SHTF knife.  So, it’s probably a bit over-built.  The blade is a full six inches of heavy Clip Point.  The blade is thick.  5mm of stele thick.  Not on the level of a Becker Companion, which is a tank… but the SRK is certainly up-armored Humvee level of rugged.
The handle is a nicely checkered Krayton type rubber-ish material.  This gives the knife a good feel in the hand, it’s beefy, but balanced and doesn’t feel heavy, and the Krayton-ish stuff doesn’t let the knife slip around in your grip, even when wet, dirty, or covered in blood. 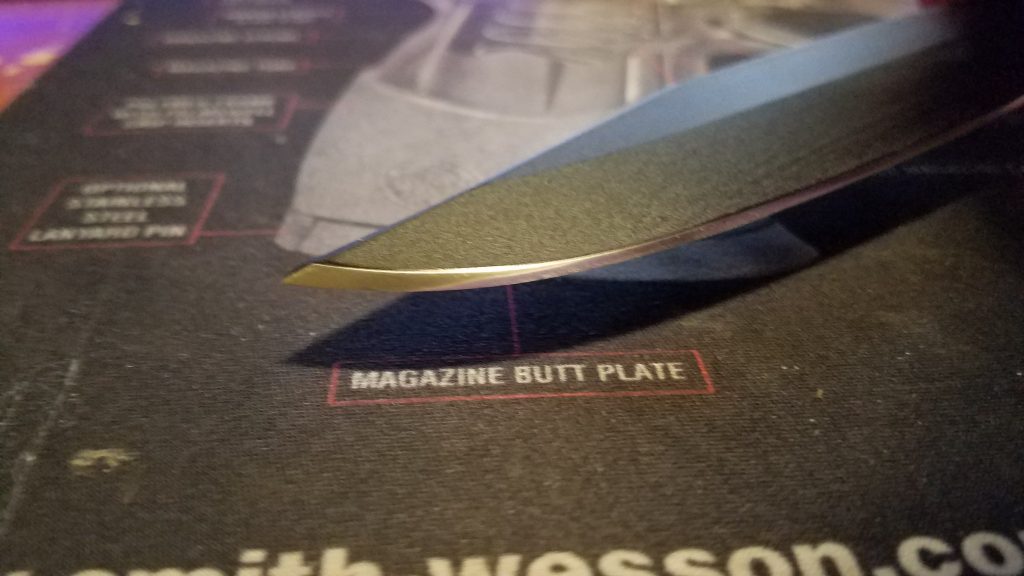 The 5mm blade thickness goes all the way to the tip.  This is not a needle sharp tip… and the thickness truly reinforces the tip.  It’s not Stabby like a good Bowie, but it’s certainly up to the challenge.  This thing can stab metal sheets.  Car Hoods better watch their tone.
My version is the original configuration and features the Carbon V blade steel.  Later versions are found in AUS-8, San Mia III, VG-1, SK5, and CPM-3V.   And this is why you need to pay attention before you buy an SRK.
All the versions of the SRK are great knives, solid and well constructed.  The newer blades have some refinements to the overall design, such as the grind.  Mine as do all the earlier knives, have a Saber Grind blade, and the newest ones have a nice shallow Hollow Grind blade, which makes the knife a bit better as a slicer for food prep, without sacrificing very much on blade strength…   But does this still work as good on camp chores?  I don’t know for a certainty, but I don’t think enough is lost to be a concern.
The blade also goes further back to the handle.  Or in more technical terms, it loses the choil and shrinks the ricasso back to the quillion.
I don’t think this is an improvement, but it does make the knife easier and quicker to produce at the factory, as there are now less processes to grind and finish.  Simpler.  I like simplification.
I’ll let people argue about these simplifications being Improvements or Corner Cutting. 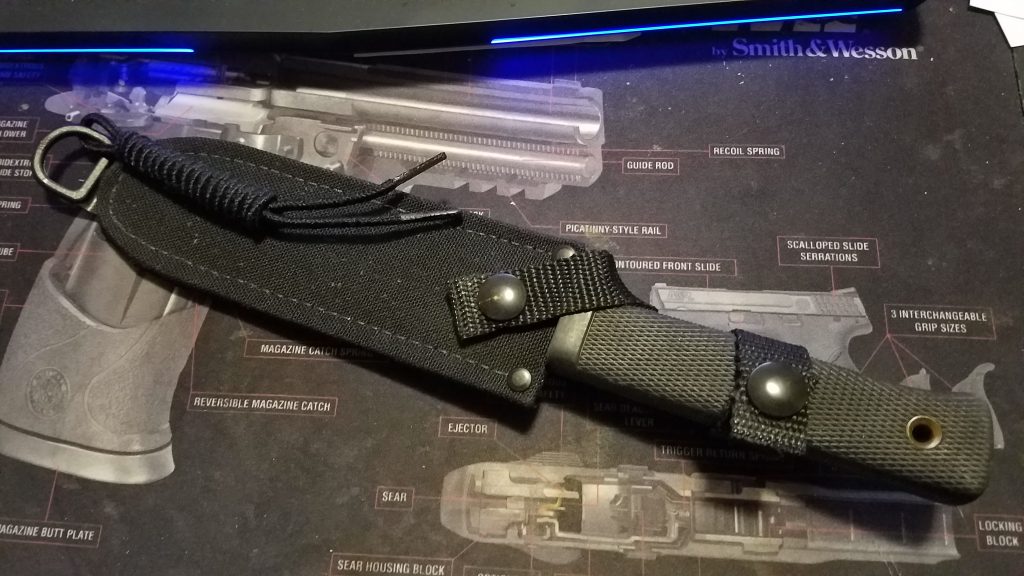 One big improvement to the SRK’s is in the Sheaths.  Mine is a simple nylon affair with two stubborn PITA snaps and a belt loop.  There’s also the loop for a lanyard on the sheath, and I have a cute little rat tail thing dangling on it.  I guess I could use that to make a leg strap.
I’ll be honest… I hate this sheath.  More than any other sheath ever in the history of knife sheaths.  The newer SRK’s come with a much nicer plastic sheath that has better retention and attachment points.  It’s just more useful.  And the damnable snaps wont fight you like these do.
Once in the hand, the SRK really makes its self very useful.  You can Baton the Shit out of ANYTHING and the knife just doesn’t care.  You chop with it, and the knife couldn’t care less.  You can even throw it and stick it into trees or the skulls of your enemies… and the SRK wont give a damn.  You are not breaking this knife.  You are not hurting it.  What’s going to happen is that you are just going to Split, Stab, and Chop everything that gets in its way.  Then when you are done, wipe the blade with an oiled cloth and the dang thing is ready for more.  At worse, you are going to mar the black coating… but for an SRK, that’s just like a big dude rolling up his sleeves… He’s only just getting started.
I’ve absolutely abused another SRK which I lent to a fellow who abused it even more… to the point that it had no coating left on the blade.  I told him to keep it.  My mistake was not trading Sheaths before I gave it to him.  Dang it.
Overall… I really like the SRK knives from Cold Steel.  These things are the Pit Bulls of tough use knives.  They are not that big or heavy, not the best looking, but they are super tough and more capable of being a Do All companion than they get credit for. 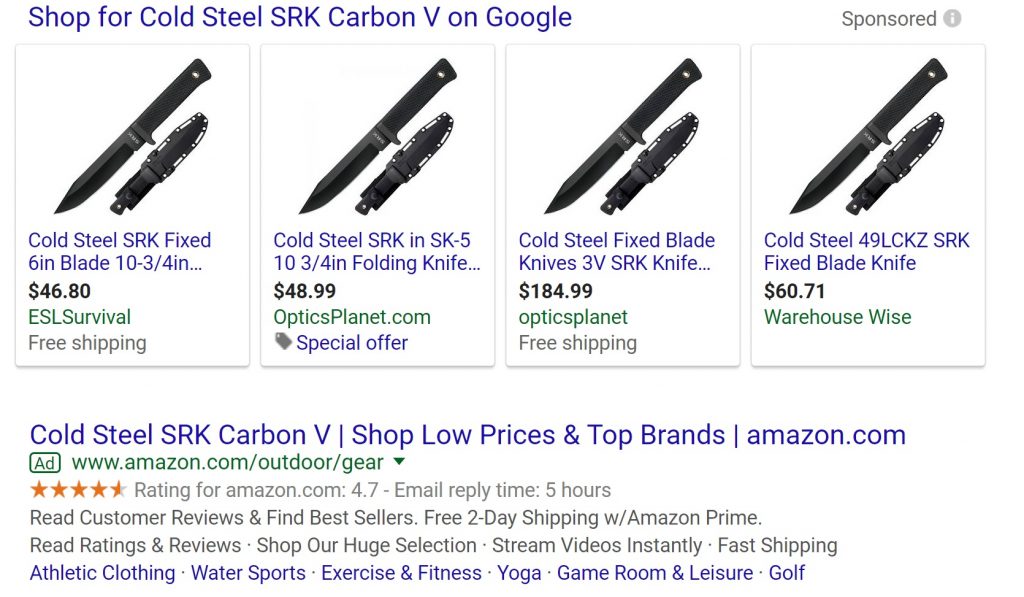 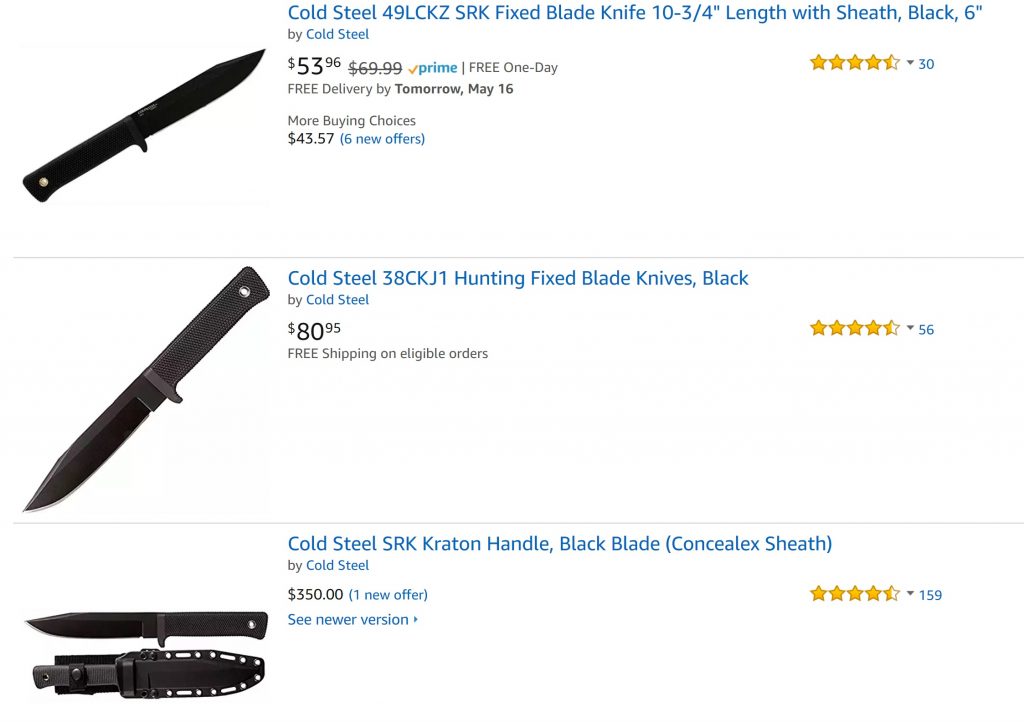 Be very careful when you are shopping around for an SRK.  The prices are all over the place because of the different blade steels out there.    But if you want a tough Do All fixed blade for your Back Pack or Battle Belt… and SRK is a total home run choice regardless of the blade steel you get.  Just make sure that it’s the blade steel you wanted and that you paid for.  Because I’ve seen cheaper knives sold as the more expensive knives.  Not naming any names, but the stores got caught by scammers buying and returning the higher grade boxes with the cheaper bladed knives inside, and then the store resells it not knowing they got ripped off.