I have already put a box of rounds through it, and I’m quiet happy with it.  Functionally it was flawless, which was a huge step up from the last Lever Action I bought, the Marlin 1895, which immediately had to go back to the factory for 6 weeks.

The accuracy was very good. I have to say that I really like the way this thing shoots.  It was shooting very accurately off hand.  But I need to get to a range that actually has a Bench so I can really see what this thing will do.

As you can see, I didn’t get the version with the flash-hider.  Because I thought about it and admitted to myself that I will never be doing anything with that threaded end anyway because if I want to go quiet, well, I’ll be using a very different weapon for that sort of work.  This is going to strictly be for hunting.  So I saved 50 bucks on got the shorter option.  I like the shortness of it.  It feels extremely short.  And light.  WOW, this rifle is light.  Seriously… it’s like 1/2 the weight of a Marlin 336.  I threw a tac-light on it just because, well, I can.  Other than a sling, that’s going to be the extent of add-ons.  I’m not decking this thing out.  In fact, I may remove the rails all together.  I’ve not decided yet.   The stock has GOT to GO!  I really can’t tell you how much I hate this ATI stock.  It detracts from the entire rifle.  I thought I had a Magpul CTR stock here at the house, but I think I remember that I had given it away back in Jacksonville to a guy in my church.  So I will be needing a replacement stock as soon as possible.  I don’t care if it’s a standard M4 stock or even a TAPCO… anything is a step up from this ATI.  Stocks should not rattle and wobble.  Ever. 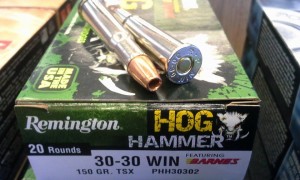 Along with the rifle, I grabbed a box of Remington HOG HAMMER ammo, as well as my favorite Federal Blue Box stuff for further plinking work.   I was going to get some Hornady LEVERevolutions for it… but I’m well familiar with how they perform, and wanted to try something new.

This gun will be used to harvest some delicious Venison this fall.  And with the Carolinas not having a limit on White Tail… I think I’m going to be harvesting a lot.   At least that’s the goal.  The hope.  One buys a rifle like this not for the collector value, but for the hope of adventures that one can have with it.