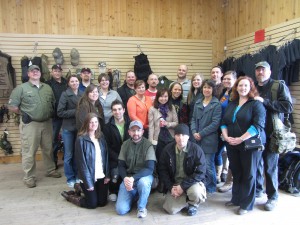 Yesterday we had the Defensive Pistol course for Teachers Only.  This course was free to those Educators who wanted to learn  20 Teachers signed up.  The weather turned and it was snowing pretty hard, so I didn’t expect a major turn out, but 15 did.

This class worried me.  Rangermasters in Springville donated the range time, but could only donate 4 hours.  Half of their range on a Saturday, is a generous donation to the cause.   Over dinner at SHOT SHOW, I took some time with George Harris, former head of SIG’s Training Academy.  I asked him about how he would approach this course.   I have no problem seeking council from The Masters.   George Harris is a great guy and one of the best Firearms Educators in the business, so who better?  I had an idea in my head, and when Master Harris outlined how he would do this, I knew I was on the right track with my game plan.   He said, you can’t do it… You can’t teach them everything.   So you have to give them the mindset and then work on the basic fundamentals of handgun shooting.  And that is just what I did.

The class was a good mix, but mostly women, and most of them had very little shooting experience.  Some had never even touched a firearm before this day.  Knowing this before hand, I was nervous about this.  I’ve never had such a green class before.  Educators are generally from a very different background than my normal students.

Thanks to the guys that backed me up as Assistant Instructors, we had eyes on everyone.  They made this work.  Every student when they were shooting, had someone watching and coaching.  One on One for every shot.  Special thanks for Scott Peacock, Trent W Snyder, Zachary Hill, Joe Chetwood, Wes Dahl, and Steven Ting.

The course went very well.  The students learned a lot and the improvements we saw were amazing.  This class was a huge success.